So I don’t really have time for this “Figure review” section for a while..or at least, until I get bored of doing these galleries.

I’ve decided to investigate Responsive web design at work, during my slow periods. At least it’s relevant to my job, and my personal growth so win/win.
And I’ve been watching stuff on my phone consistently as well while I work. DOUBLE PRODUCTIVE.

And then I come home and work on photography and watch shows. DOUBLE PRODUCTIVE.

My web development growth has taken a back seat in the last few weeks while I focus on photography. I’m also going to gather some blogs and start figure out how to write reviews for my statues…writing is hard though. Not sure if I even wanna do that….

I tell you though, the most innovate thing I’ve come up with is nothing innovative at all. My Achievements/To Do list. But that thing is being used SO FREQUENTLY and keeping me on track SO WELL that it’s the best thing to happen to my productivity in a long time :)

/off to do more photography…

Spent the afternoon doodling while watching Turtles Forever and The Fast and the Furious at work (on my phone).

My first attempt at a Ninja Turtles 2003 picture 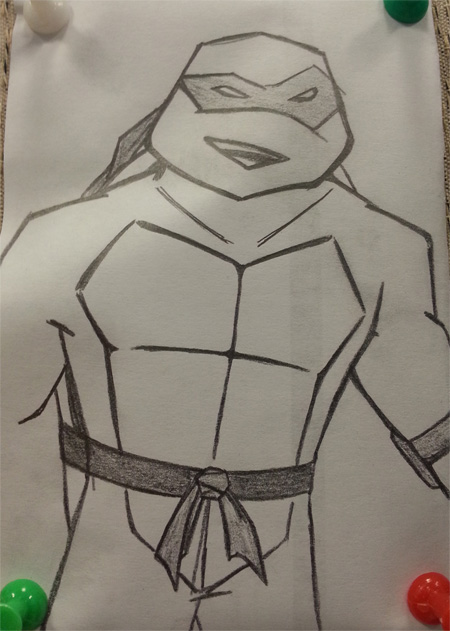 My second attempt…the hands/arms didn’t come out the way I wanted…it’s okay :(
Didn’t use a picture, all from my head! Haven’t drawn anything in a while :) Very happy with the turnout! 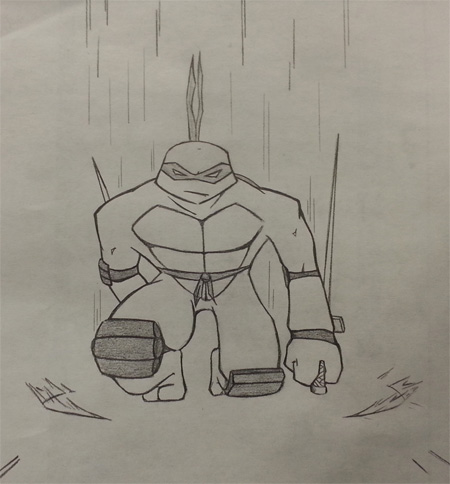 Posted in All Posts, Daily Randomness, My Life, Work | No Comments »

Killing with compliments; Parents praise sets children up for failure

This was an interesting read that Z forwarded to me. If you choose to read it, do so now. The rest of the post may not make sense if you do not. You’ve been warned.

I thought the article rang true, particularly to me. My father always emphasized intelligence to me. They often spoke of me being smart and becoming a doctor when I grew up. I guess that’s the same with most asian parents. But I believe I was coddled. Don’t get me wrong, I was smart. But just not that smart. I remember as early as Grade 2, when we did “Math Minute”: as many math questions as you can answer in a minute. Accuracy mattered. We did it every day for the school year. Tracked the scores. I won (best speed AND accuracy in the entire class). *BAM* TAKE THAT OTHER 25 KIDS IN GRADE 2. Grade 4: Teaching kids to divide. The teacher was explaining division to us, and I put my hand up, went infront of the class and explained how it worked. What a keener. Lucky there was no Nelson or Jimbo in my Grade 4 or I would’ve gotten the snot kicked out of me. Yes, I guess I was Martin *shudder* >_< 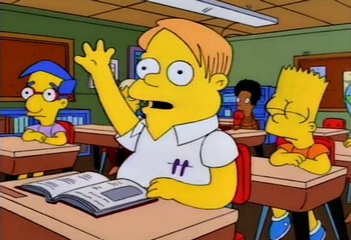 ANYWAYS, enough of my embarrassing elementary school. And highschool where I also did well in Finite, Algebra & Geometry…(tho did bad in Calculus >_<) Basically, I always thought I was smart. But being smart isn't enough. You have to be hard working. And I think my false sense of smartness security had a negative impact to my work ethic. And as I realized in University, those that weren't as smart as me, that worked harder than me, did better than me (surprise, surprise). I think the biggest detriment in my life was the poor work ethic at a young age. I'm partly to blame for that, but the self-awareness and realization of such a thing would not come to me until I was much older. “You don’t know what you don’t know”. Sometimes you need to be TOLD it. I’m not blaming anyone, other than me, I’m just stating the fact.

I actually already have a list (in my GMAIL drafts) on what to teach my kids. What to tell them, what not to tell them. I want to help them as much as possible. My parents were there for me. But they were poor with guidance. At worst, they influenced my life negatively, despite their best efforts to help positively. But unfortunately, the results were the same.

I don’t want to make that mistake. After I have kids, every day is a day to adjust yourself as a parent, and as a teacher. I will not fail my children. I will teach them everything I can. Guide them. They can make mistakes, but I don’t want them to grow up on the wrong path. If they’re trouble at 5 years, it’s too late. I’ve done something wrong and need to adjust. Show them the carrot or hit them with the stick, I don’t know. But I have to figure THEM out, figure out how THEY respond to criticism, learning, and follow that. Giving them the carrot when they’d learn better with the stick is not correct. All children and people respond differently. They’re too young to figure it out. You have to figure them out first to achieve the best response.

I had a discussion with my parents on how I quit Chinese school to go to Math school. And as much as I wish I knew Chinese now, I don’t know where I’d be if I learned that. Chinese did not come easily to me and I struggled with it, both in interest, and in learning. In contrast, math was easy and I was good at it…and that skill helped my entire life – from highschool to university to now. If I were to go back in time and choose my path again, I would again choose math. Not because of where my life is now, but because I was naturally good at it. Better to excel at something than to struggle with a skill and end up being mediocre at best at it. That might as well be useless.

No conclusion. Left to ponder…

Posted in All Posts, Introspection, My Life, Past | 1 Comment »

“I don’t wanna be the good guy anymore”

I’m bummed. So it’s a good time to write. Let it all out. Figure things out.

Side rants before I blog:
A few of my friends have started/restarted their blogs since the new year started. WUT, DOES EVERYONE BLOG NOW?! Jenny Elle & 5phl. I’m slowing down on my blogging and suddenly these people are getting all insightful and down with the written word. It doesn’t make me want to blog more. It makes me want to blog better. But I’m tired of blogging better :S I just wanna blah blah my life Q__Q
Okay. Side rant done.

So, I came across one of my friend’s sites today. And I got bummed. I don’t think much of this person…he’s lazy. Cheap. Rude. Obnoxious. And then I saw his site. And it was really good. Really really good. Visually much better than mine. And then I saw the code. It was good. I can do better, but it was very good. I couldn’t do what he did 2 to 3 years ago. I was surprised, but suspicious. He said he did the site himself. This person, whom I don’t respect, can pull off such a feat of design and development? Have I been too quick to judge? Is my intuition wrong?

I look at his code…and I’m in shock. How can this be? A beautiful page of code, proper indenting, CSS, everything just like me. The sign of a developer who cares.

And then I see it:

And I realize…any person who codes such beautiful code, uses proper CSS, would never do a <font> tag.
Even to be lazy, a person of such skill would choose to do <span style=”color:#005b97″>Some text</span>. Or better yet, assign a class to it. The <font> tag would NOT be used.
And then I realize: He didn’t do the site. But he did that <font> code. He said he did the site, but the extent of HIS skill is there. <font> is his skill-level. He’s a phony.

I mean, I could create a one-pager website using images from Google, slap on an “Employed by Blizzard” and who would know? But I don’t. That’s not my style. Lying’s not my style.

But it bums me out because…have I taken the wrong approach?

Does lying to succeed in life justify the negative morality?

The only hope that I have is that karma will set the rights in the world. But even that thought is somewhat a wish that bad things will happen to bad people, because they deserve it. And good people don’t think that. Maybe I’m just a bad person with the conscience of a good person. Now THAT would be bad…for me.

I’ve seen it time and time again. The corrupt. Those that abuse power. I try to put my head down and work…but sometimes, I just don’t feel that honesty will get as far as dishonesty. A person that pays $30 for an item is $60 poorer than the thief that steals the same item (..i hope that didn’t go over anyone’s head).

I’m not saying I want to lie and cheat and be dishonest.

I’m just saying…sometimes it’s tough being a good person when people around you aren’t.

Posted in All Posts, Introspection, My Life | 5 Comments »

Haven’t blogged in a while.
Been spending many of my nights doing some photography. Went to the US last weekend and was able to pick up some of my packages. I now have all the Kotobukiya Bishoujo statues! Mwhahahaha The POWER, THE POWER.

Been watching the 2003 Teenage Mutant Ninja Turtles cartoon. It started off that I was just kinda having it on…but it’s…really, really good! I’m definitely glad I started watching it. 2 more seasons to go and I can move on to the 2012 version, which I also hear is REALLY GOOD. So can’t wait for that!

Deving something fun (not too challenging) at work lately. I think, after putting Teenage Mutant Ninja Turtles on my phone (BTW, I love the Samsung Galaxy S3 compared to the iPhone for it’s ease of use PC-wise), I think I’ll start staying at work a little later and watch shows TMNT while I dev.

Spent most of the day today deving and watching Prince of Tennis Nationals…was able to go through tons of eps and it helps make the day go faster. Going to start watching/re-watching shows at work again, while I work :)

What’s next though? Need something relatively easy to follow. Cartoons are perfect. Dramas are likely a no-no. Maybe I’ll rewatch a comedy or something.
Aqua Teen Hunger Force ?
Samurai Jack ?
Star Wars: Clone Wars ?
Adventure Time ?
Rewatch Batman Beyond ?
Batman: The Brave and the Bold ?
Star Trek TNG, followed by DS9 and Voyager ? (seriously, I’ve only ever seen Voyager…I’m not a trekkie…but I wouldn’t mind becoming one).

That’s it for me I guess. Keeping busy :D

You are currently browsing the World of Warren blog archives for January, 2013.