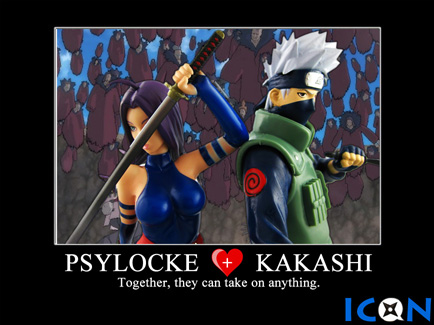 So, I bought this Psylocke and Kakashi toy around the same time and when I was taking photos of them individually, I put them together and….their poses worked really well together. They’re also both ninjas, from two different universes (Psylocke from the Marvel Universe, Kakashi from the Naruto Universe) and I dunno, I thought it was kinda kool.

And also, Psylocke’s a girl, Kakashi’s a dude…so I also thought why not, they’ll be in a romantic relationship…and fight off hordes of   any picture of many ninjas i could find (it was a lot harder than i thought)

Posted in All Posts, Art, My LOLs | No Comments »