Trying to pass your feelings & emotions to others …. with music

Everyone has different tastes in music. They have different songs that are special to them, songs that bring up specific emotions, songs that apply to their situation, or songs they listen to to compliment the way they’re feeling.

I’ve been wondering how to…share the music that I’m addicted to at the time with others. I had a moment where I would post the song I’d been listening to to twitter but I didn’t really like that. I thought it’d be kinda twitter spamish (not that I don’t already spam twitter with irrelevant content). I also tried putting a
Currently Listening:

I took that off as well. Didn’t like it. It’s not aggressive enough promotion/marketing. Karol put up a blog post for a song she’d been listening to www.onlyakiss.net – the world has it’s shine. At the end, she wrote “Really I just wanted to have others listen to the song, lol.” Pretty much the same thing I want to do but I don’t think I want to make a post either or there’s gonna be an even more overwhelming number of posts. The fact that you can embed the video does appeal to me tho….

I don’t know…when you have a song you really like, you just wanna share it with everyone in hopes that someone else might feel what you feel when you listen to it. If you’re successful, you feel that you’ve opened their eyes to something new and awesome. Like telling someone “This show is awesome, you gotta watch it!”. And after you both watch/listen to said item, you can discuss and…share your thoughts and feelings. Sometimes people feel the same way, sometimes they don’t. I know I’ve sent that Full Metal Panic! Fumoffu? Intro to so many people (I might as well give it a plug while I’m here…)

The point of this post was basically just me thinking aloud about how I wanted to share the music I’m listening to in hopes that others would give it a shot.

Yikes, as I re-read this post I realize how…obvious…the content is. There’s nothing of any higher insight at all…but I don’t want to erase it…and if you’ve read this much, it’s too late! Sucker!

Posted in All Posts, Music | 3 Comments »

When I’m in a high emotional state, my mind starts racing and I sometimes develop a moment of Apophenia.

Apophenia
Apophenia is the experience of seeing patterns or connections in random or meaningless data.

I don’t know quite how to explain it…maybe you saw Russel Crowe in A Beautiful Mind or The Question from the Justice League. You see….connections between things that don’t have any connections. I feel like I’m in a state of heightened awareness or…I don’t know how to explain it. Like when you play pool and see all the angles to the balls that you wouldn’t regularly see.

I was reading all these connections today…very subtle and unimportant but for me, they were undeniable connections between things. Now, a few hours later, I’m sure these connections never existed. I can see..what I was thinking, but I don’t know how I came to believe them, they’re so…impossible.

Zena’s seen this in action when I believe my iPhone is vibrating when it’s not. I’m not sure what it is but I constantly hear the sound of my iPhone vibrating as well as my Xylophone alarm right after I wake up when it’s not actually on. I would end up checking my phone repeatedly to turn off the alarm but the alarm wouldn’t be on. It might be conditioning, that I associate that sound to the morning or something…but I don’t see how that would fool my sense of hearing.

Also, lately at work when I’m listening to music, I “hear” my name being called randomly. I turn around and no one’s said anything. It’s usually Ron who’s voice I “hear”. I only noticed it these last 2 weeks, but I remember when Karol first started, a couple months ago, I kept “hearing” my name when she hadn’t said anything. Zena’s noticed this too, I keep thinking she’s said something when she hasn’t. All of the above are either girls or are soft-spoken. I had a lot of trouble hearing Ron when I first met him…Karol as well (and still). Maybe their voices are kinda like…phantom voices that I hear mixed within other sounds…

Wow….you know, at first this was a 1/2 serious post. I had already written my closing joke for the post: “Seriously, I think it’s safe to say that I’m simply going crazy. It’s okay, long ago did I accept the onset of senility.” But writing more into it and coming up with recent specific examples is actually scaring me a bit. GG Warren, you’ve scared yourself into stress and anxiety, right before you were about to sleep.

Seriously, I’m going to have to monitor this. This could potentially be…a very very bad thing.

Posted in All Posts, Introspection, My Life | No Comments »

Mario Kart (SNES) was THE game for me 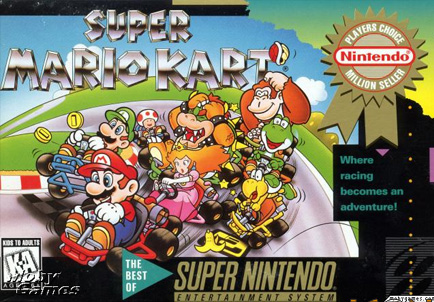 When I was in high school, my friend has gave me Initial D: First Stage (Anime) to watch. I was skeptical…an anime about cars? I had never been a car person…I took his word for it and gave it a try. Over a decade later, it would still be one of my favorite animes of all time.

Imagine my surprise when I found Initial D: Arcade Stage (Racing arcade game) at UWaterloo Campus Cove. After spending over $1000 in first and second year university playing Initial D, I became pretty damn good. On the online rankings, I would rank top 10 in Canada on over 1/2 of the (8) tracks (4 uphill, 4 downhill). Again, that doesn’t count all the people that don’t input their track times into the site so it’s a bit misleading. Still I would say that I was within the top 25 in Canada for sure. It was very…satisfying to be that good at something. Looking back at it now, I realize that my skill probably came from my years of Mario Kart (SNES).

I’m in a Facebook group called “I learned how to drive by playing Mario Kart”. While I didn’t learn to drive a real car from Mario Kart, I definitely learned the fundamentals of an ideal line, inertia, action and reaction, and drifting. Of all the games I’ve ever played in my life be it World of Warcraft, Initial D, any Street Fighter or Puzzle game, Contra, Mario Bros., I don’t think I’ve ever been more skilled at a game than Mario Kart. Mario Kart was my IT game. It was THE game for me.

My skills aren’t what they used to be anymore, I can’t do the lines or track times that I used to…but my SNES records from my prime speak for themselves. Recently, I tried to search the internet for best course times. People would post their fastest times and I compared them with mine and LUL, my times were still better!

I don’t think I ever played anyone who loved the game as much as me. I would have loved to competitively race another highly skilled driver. Maybe that’s why I loved Initial D so much. I’m like Takumi challenging other racers. But more likely, I’m one of the arrogant opponents who lose on their home course to Takumi :D I’m good…but I’m no Takumi :(

Posted in All Posts, Games | 3 Comments »

The urge to write

Argh! I was having such a bad day today. Things just didn’t go well. To be fair, I slept at 2:30 am last night and woke up at 8…I also skipped lunch. I think that probably played a big part in my sh!tty afternoon. I felt really…uneasy. Stressed with nothing to be stressed about. It’s hard to explain.

Anyways, the thing I wanted to do most while I felt this way…was blog. I had this incredible urge to just write about anything. My mind was racing and unfocused and I just wanted to release whatever was in there. I sat in-front of this same webpage that I’m looking at now. It was just me, an old draft, what I’d written before and what I intend to write. Everything else began to fade away.

I never really…had this outlet before. I didn’t even realize how much writing seemed to relax me. I’m trying to think about what I would have done if not for this blog…I would probably have just stewed with my music and my thoughts. Maybe taken a walk to clear my head, I don’t know. Even now, as I write, I feel so focused…everything in the world doesn’t seem to exist. It’s very relaxing.

I’m listening to a song right now, the same song I’ve been listening to for over a week, both at work and at home, replaying over and over….the lyrics just caught my attention as they seem to apply right now:

Maybe my answer is here. Maybe this is where I go.

Posted in All Posts, My Life, Writing | No Comments »

ZOMG. I was going to save this post for tomorrow but something came up that made me really want to write this post today. So many posts today! I have no self control >_< So, I had been using tinyURL for years, since at least 2006 apparently since I have tinyURL links on this page: http://www.horderockcafe.com/version_1/bwl.aspx?content=Links

I’d been using it until I started Twitter last month and noticed that everyone was using bit.ly. I thought “meh”, I’ll just use what I’m using now. Of course, my new resolve of “trying new things out” and “embracing change” made me look into bit.ly.
Note: New me is using/doing: Twitter, Blogging, had a Corona with dinner today, Jailbreaking iPhone, TwitPic, bit.ly + other things I’m sure I just can’t remember atm).

Wow, I’m shocked at the data they keep for each bit.ly! I always didn’t like that if you put the same link into tinyURL, you get 2 different tinyURLs. Obviously, they don’t do a database check of the URL and just assign a new one. What a waste of space! bit.ly doesn’t have this issue, the URL is checked in the database of URLs and if the URL has already been bit.ly’d, bit.ly just gives you the original bit.ly URL. When I looked at some of my recent bit.ly’s

The top one has been bit.ly’d almost 2000 times. That’s 2000 saved URLs and rows in a database.
Note: tinyURL does the above now, I just checked. 4 years ago, they did not as I remember testing it out before and getting disappointing results

I was looking at the tinyURL combinations and thinking that they would/should probably remove the curse words so things like:
tinyurl.com/fuck
tinyurl.com/shit
don’t work…much like they have to eliminate these types of words & acronyms on license plates.

Well, I actually gave tinyurl.com/fuck a shot and it redirects me to some random page, http://www.gfgfgf.com/

tinyurl.com/shit (and this is what made me LOL and HAVE to post this today), redirected me to http://www.amazon.com/exec/obidos/tg/detail/-/B00006GSNX
It’s an Amazon page for Ratchet and Clank for the PS2. I LOL’d.

And then I wrote this post. and now I’m ridonculously tired. I will proofread this tomorrow….

You are currently browsing the World of Warren blog archives for February, 2010.