I’m going to the same URL on 3 different browsers (2 of them being Chrome, same version no less) and I have 3 different results/experiences! 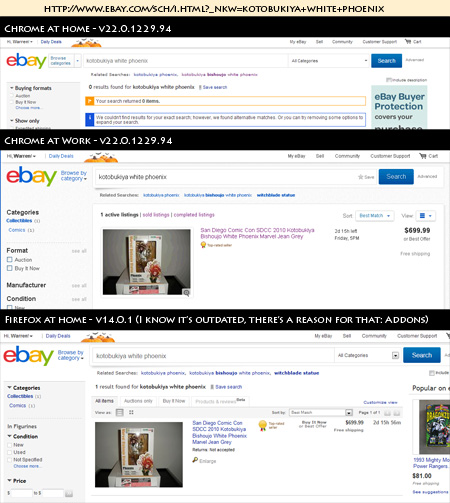 WTF IS GOING ON. HOW COME AT HOME ON CHROME I GET NO RESULTS.
YO. THAT’S MAYBE WHY I CAN’T BUY MY SHIT.

and no, I’m not buying that $700 White Phoenix…despite being international, it’s quite a bit more than I’m willing to spend

Posted in All Posts, Daily Randomness, Shopping | No Comments »

You win this round, asian bootleg eBay seller

Unfortunately, it seems most all sellers have decided not to ship to Canada. Apparently, packages shipped to Canada are often lost and the eBay sellers from the US need to refund the money to the buyer in this scenario. Word is catching on to everyone…and it now seems that 1 out of 10 sellers will ship something expensive internationally.

So, when there are 9 of the same item that will only be sold in the US, I can’t buy it.
And when there’s that ONE (out of 10) item that will ship to Canada, I’m bidding against all the other Canadians. So prices go WAY up.

Anyways, I ended up buying a rather expensive statue ($245), somewhat impulsively, given the situation described above. I saw it go online and within 5 minutes, purchased it. I looked at the other guy’s record first though (97%…which is low for eBay but not bad), I looked at the other things he sold and the other feedback. I was decently confident with this seller, so I purchased the item. with $30 shipping, it came out to $275.

2 weeks later, I get my package. And it’s opened. Despite saying it’s brand new in the description.
I don’t really mind this though, as long as the item is in good shape. It’s a rare item, so I’ll forgive it being open. What I can’t forgive is this painting issue: 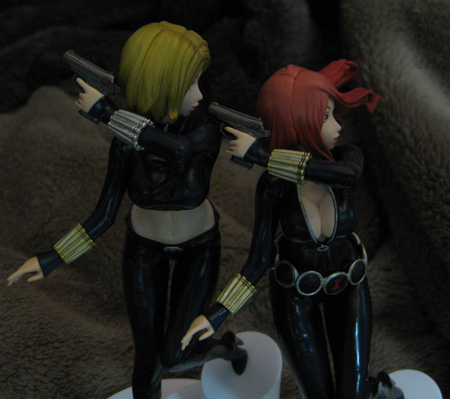 One of the bracelets is silver, where it should be gold. I talked to Kotobukiya, the manufacturer and they did confirm it was not a legitimate product based on the UPC on the box, and that the “exclusive” sticker on the box was fake (but well done). It’s unfortunate because everything else is perfect quality. I imagine that what I received was a legitimate, but defective product, not a bootleg product.

Anyways, I complained to the seller:

The item I purchased is bootleg (not legitimate). I have contacted Kotobukiya to confirm this. Also, your item was not described correctly. It explains the items is new, unopened but the box was opened when I received it. I demand a refund and I will return this item as per the return policy stated on your product page.

If you do not comply, I will inform eBay and PayPal of your bootlegged product, dispute the charge, and provide you a negative feedback.

oh im so sorry.
I mistake condition.actually I named mint but I mistook for new instead of used.
im so sorry for bothering you.
of couse I refund money.

but I would like to inquiry you.
how much do you buy this item?

this item is actually used.so its my mistake.
but if this item is used condition,its very rare item.
I want you to buy this item for 150$

I was thinking to myself: what does this mean? Does it mean he expected me to keep the product, while I get my refund, and that he wanted to buy it for $150? In that sense, I could have made a $150 profit. Due to the lack of clarify in the email though, I didn’t want to take the chance…that he meant “I will refund $150 of your money back” because if I agreed, it would hold and I’d be screwed $125. So I clearly wrote:

ok Im so sorry.Its mean of couse for you to get uncomfortabale.
im sorry again.
I try not to do such thing.

Anyways, he did seem pretty sincere about it though I bet he knew he was trying to rip me off. He probably assumed I wouldn’t notice or care and then we’d both be happy. Unfortunately, I need this statue for my website/photography so I want a legit version.

I did get my refund immediately but lose the shipping cost it will take to return the item ($40). Sigh.

I would have/could have asked for more money but I didn’t really want to push my luck. To be honest, if he didn’t pay me, there’s nothing I can really do. I can disupute it was eBay or Paypal or whatever…but these asians don’t care/won’t get affected. They close shop and re-open shop with a different name a day later. The guy only had 33-person rating on eBay so it wasn’t like he was established. I’m actually pretty pleased to get my $275 back, even if I still had to pay $40 for nothing. Better to cut my losses.

I’m done with this way of things. I talked to some co-workers. I set up this service (http://cbiusa.com/) in which I ship packages to Niagara Falls, NY. A company keeps the packages and then I can go pick them up for $6 per package. The real issue is driving to Niagara Falls (1.5 hour drive, 3 hours there and back) and the gas it cost. Still, the discount I get for not having to compete with all these damn Canadian buyers makes up for the difference.

Posted in All Posts, My Life, Shopping, Things I Own, Things I Want to Buy | 1 Comment »

…of my Secret Project KB.

There’s just SO MUCH content to create/pour. I knew it’d be a long project but I underestimated my need for perfection and thus, how long I’d spend re-doing something (like photographs) that are 90% perfect.

I’ve only been working on this project since June…5 months (though I took a month break).
In a previous post, I budgeted 2 months. (I often underestimate projects as I too strongly believe in my abilities, especially the one that says I won’t procrastinate).

In that previous post, I also said 1 more month for warrenshea.com and it took 5 more months. Looking back at my posts, warrenshea.com was being on and off worked on for about a year. >_< Though technically decently complicated, I know the reason was that it took a long time to compile the portfolio section and that I really struggled with the writing. Geez. Worldofwarren took no time to set up. Anyways, I'm going to try to continue and finish my Secret Project KB. The key is eternal vigilance: consistently working on it every day, until it's finished. Taking a day break turns into 2 turns into 5. Once Secret Project KB is done, I've decided to take a break from my projects (plan subject to change) and take some time to study/re-learn regular expressions, read that clean code book, get better with jQuery, and learn Backbone and Node JS. These projects I’ve had are too time consuming with very little payoff in terms of learning new things. I need to change it around: quick projects where I learn a lot. How will I do that? I’ll have to think about it ;)

I also want to rewrite some of my code given that I’ve learned new things. I think that’s a really good idea.

I was also thinking about taking my javascript files, turning them into PHP with a JavaScript MIME type, and loading them with a querystring that tells it to minify.
So I would work with a PHP (that renders in Javascript) that’s heavily commented and organized and all that.
But when I load the script, it’ll be something like
<script src=”javascript.php?minify”> and it’ll output the JavaScript file without comments, which I can remove with PHP and regular expressions.

The purpose of this is to serve up a minified, very short (and thus, small) javascript file when used to load the page. However, when editing the file, I can add as many comments as I want. That way, anyone who wants to read/learn the code, can understand it (by going to javascript.php) whilst I still serve up a small file (by loading javascript.php?minify). WIN WIN.

Anyways, that’s what I have in my head. SOUNDS LIKE FUN. And isn’t that the real goal? :)

This is what’s new

Had an infection in my head, as of last weekend.
Had to go to the ER (on Thursday).
Wasn’t as serious as it sounds….I think.
I’m healing well.

Thought I was going to have some ear damage. I noticed that while I could still hear okay out of both ears, the sound of my own voice sounded off. But it seemed to have return to normal.

I’ve also been sleeping in the same position for 7 days because any other position would hurt too much. That’s annoyingly not fun at all. But I’m healing well and can return to my regular sleeping positions :)

That’s all, nothing new to report. Just been trying to relax and/or working lightly.

Re-playing Kirby: Return to Dreamland with Z. It’s a really cute fun game, good for 2-4 people :) No timer so you can take your time..that’s nice.

Update
Also, I noticed that while I had this thing, I would have very frequent and memorable dreams. Not sure if it’s related in any way…it was pretty crazy though.
Had a zombie dream one night and I was trying to push a zombie away with my hand in my dream. I woke up immediately after to Z asking Why I’m pushing her (in real life). Pretty funny :)

Notes
Man, I got so much done this month and it’s only 2 weeks in! But I was also on vacation for a week…
I was able to go through all 22 VHS tapes from my past, digitally recording stuff I want to keep.
I was also able to do a crazy number of image rotators. Now that I’ve decided to do the shots during the night (as well as the day), I can do tons. 11/37 done so far.
Also watched quite a few movies…The Prestige was by far the best on the list above. A Christopher Nolan film! Definitely one of my favs…

You are currently browsing the World of Warren blog archives for October, 2012.