So I just started reading One Piece. I know, I’m two thousand and late….
I’m at Chapter 227 right now, about 1/3 done. It’s pretty entertaining. There are quite a few parts that (actually) make me LOL and I love that. The comedy in this manga is totally my styles.

Came across a piece of line art while reading the chapters. I liked it and I started to color it for sh!ts n giggles. I’m occasionally doing it when I’m bored or watching something… 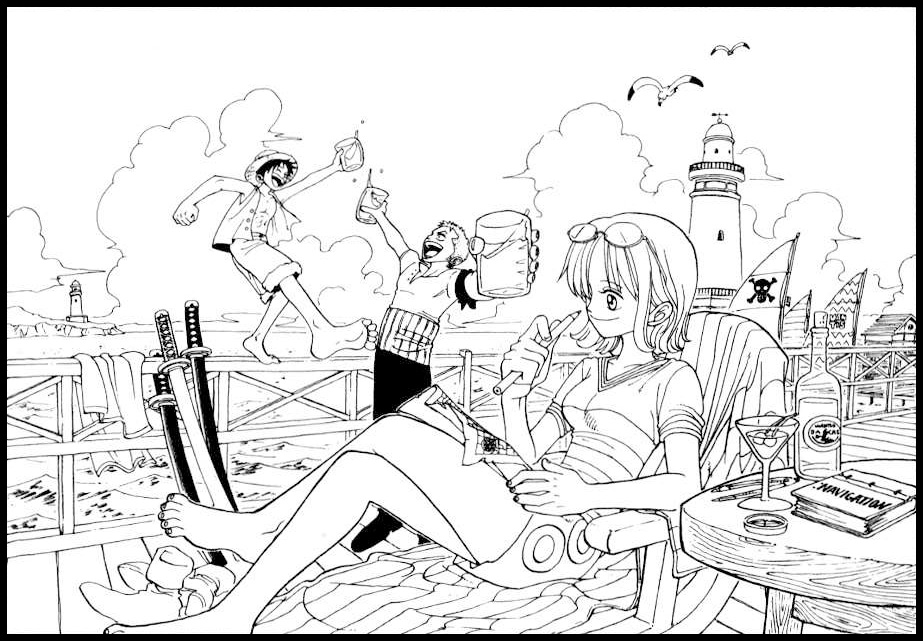 (Note: There’s quite a bit of image degradation it) 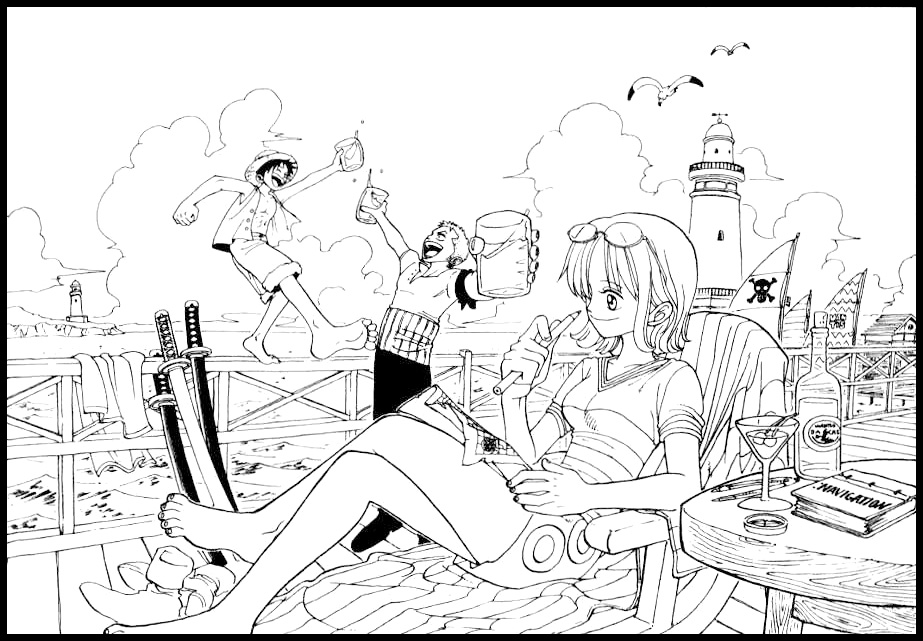 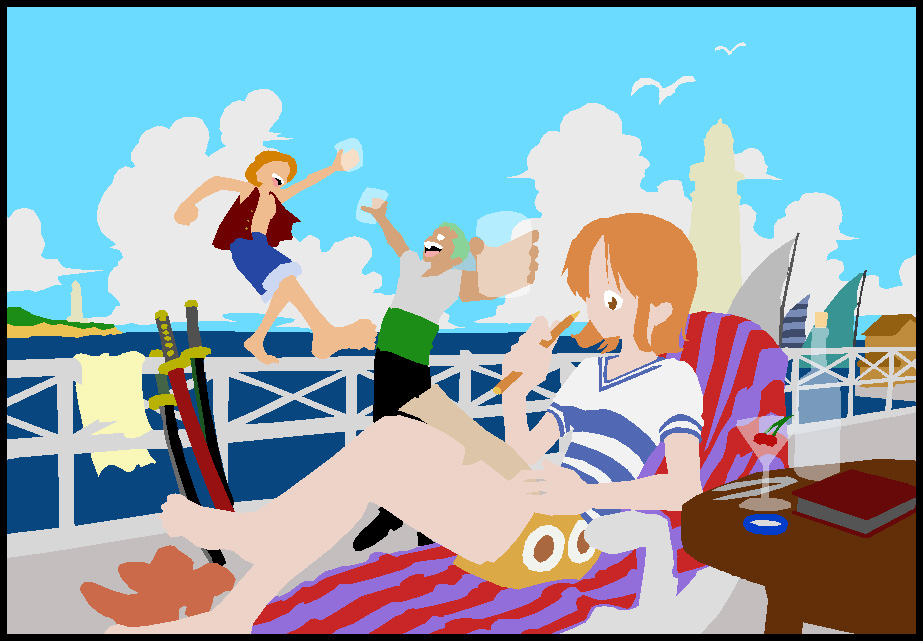 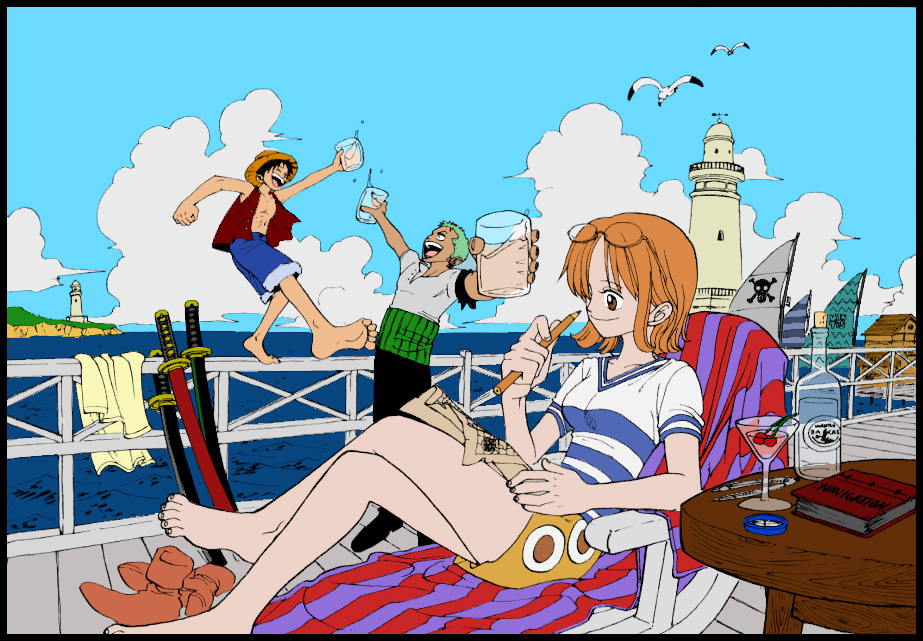 Keep in mind that the purpose of flats is to create an aliased (note: NOT anti-aliased) method of separating colors. It makes it easier to select them for modification. (I actually have professional freelance experience making flats…for the Street Fighter comic :D sry – I did like, 3/100000000 pages and that’s honestly one of the coolest things I’ve ever done in my life ;P so I like bringing it up…)


Adding Depth to the image! (not final colors) 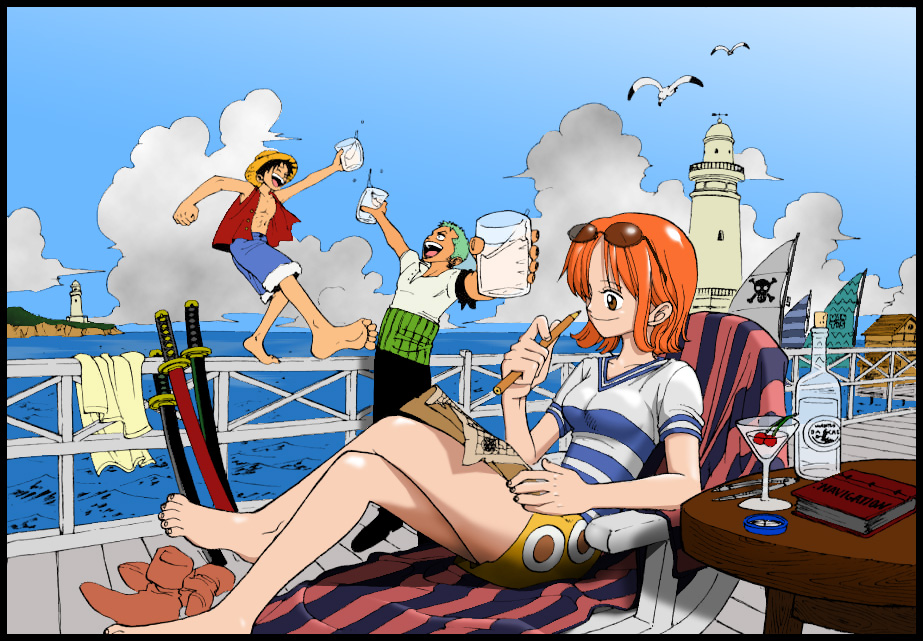 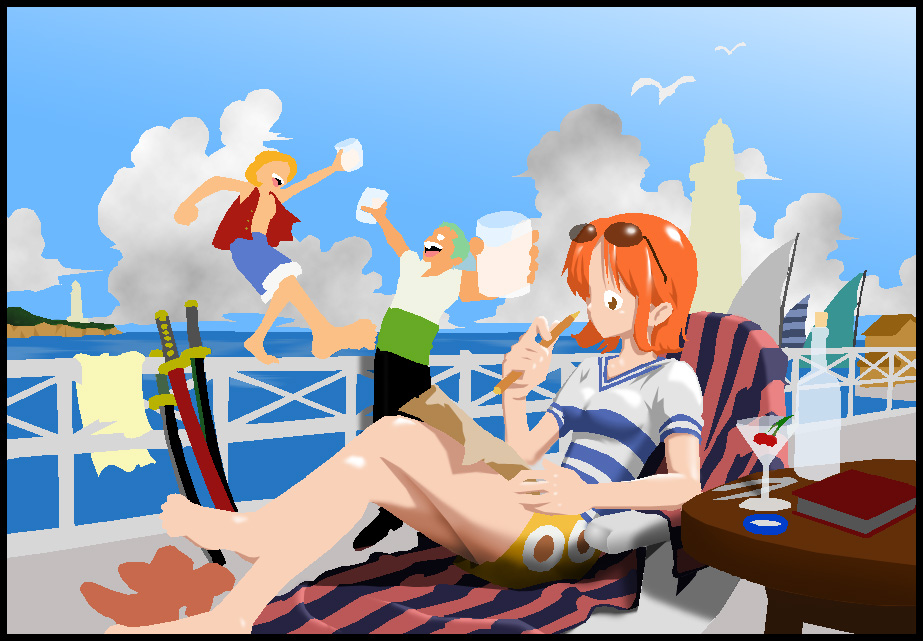 It’s really coming along well! I’m so happy with the progress so far! I don’t wanna sleep, I wanna keep working on this!! Safe to say, I’ll probably be doing this all day tomorrow :)


Playing around with the layers 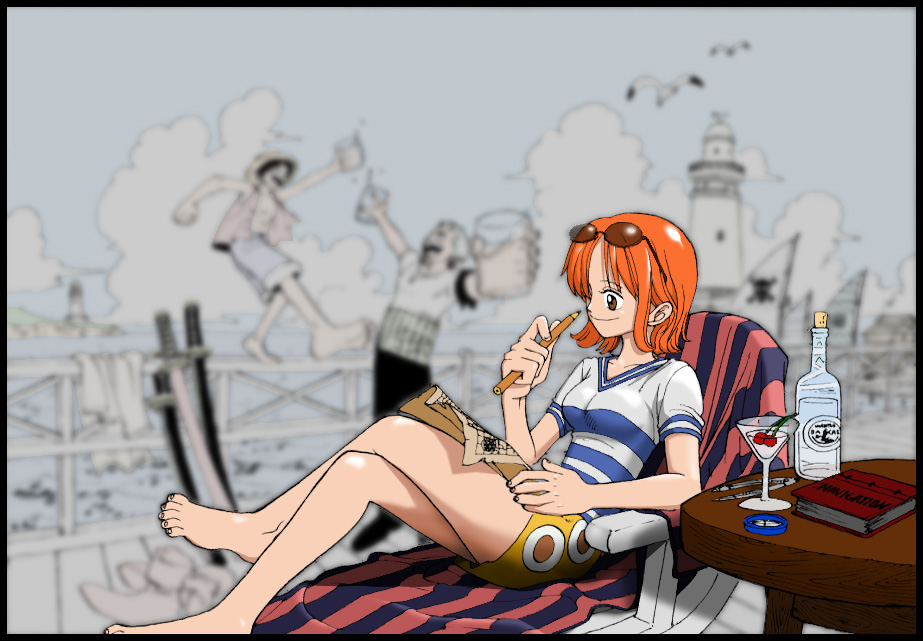 Probably post the PSD at some point if you’re curious :D

Having. SO MUCH FUN. Maybe I should do this art thing again, and soon :D 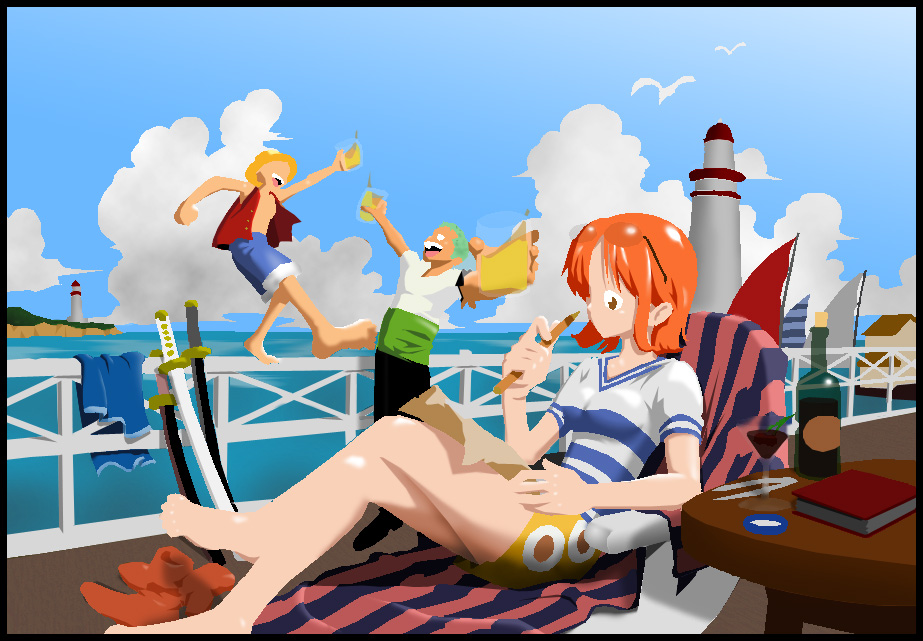 Final V1 (I’m done – sure I could tweak more – but I don’t want to, I need to do something else for my sanity) 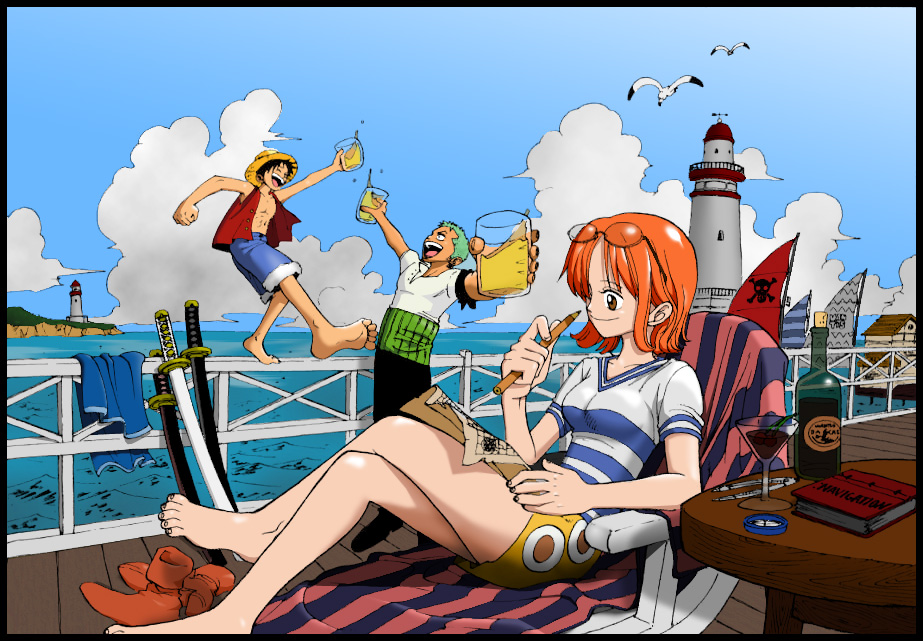 Posted in All Posts, Art, Design & Art | No Comments »

So my computer, that I’ve had since 2007, starting “chirping”. It’s something to do with the fan on the mid-tower case (it’s an Antec 900). It’s like ‘chirp chirp chirp’ at an incredibly high frequency. Sounds like…..CHIDORI!

Anyways, I disconnected the fan and it was good for a moment. But now my other fan is chirping. I’m worried that if I disconnect both fans, my computer won’t be cool enough to run.

So I’m looking into a new computer…and I realized, I only have 3GB of RAM on my PC. But I have 8GB of RAM sticks installed. But it’s cuz Windows 7 32-bit only registers 3GB. ….WUH? So I’ve been at 3GB of RAM for 6 years, despite 8GB potential, due to my Windows.

So I was planning to just use my Windows 7 32-bit on my new computer, but now I think I should get a Window 7 64-bit. Now…where do I get one? I haven’t bought a windows in a while, I was fortunate to be able to use Z’s UWaterloo MSDN store’s version of Windows 7. But I no longer have access to that…y’know, for 5 years. And no, I don’t want Windows 8.

Anyways, just kinda talking I guess…Need to figure some stuff out.

Posted in My Life | No Comments »

4/4 today …
4 separate but sometimes related posts (that is, I wrote all of them in one post, then decided to split it up). Start from 1/4 and work your way up!

Got this idea from another site but I’d love to see an MMO Pokemon game in the future. It would not be unlike World of Warcraft to be honest…except you don’t kill things, they faint. And sometimes you capture them.

There are already potions in both!

Just imagine a 40 person raid, sending out 40 pokemon, all retriving 1/25 pieces of a flute….to move Snorlax!

BTW – I wish I had someone to correct me on my use of commas. I think they’re out of control. Like, how many times are they used improperly, I wonder. Must bother someone with skill on the written word….

Just realized, it’d be nice if there was a competitive writing show.

So you think you can write?

The miracle of creation

I’ll say that as a developer, I feel incredibly blessed in my profession to create. To code something from scratch and behold it’s functionality, clean code, small file size, efficiency, and optimization. It is not unlike a musician that composes a song. Or a baker that bakes a cake. Or a cook that creates a stunning dish. Or an painter that paints a masterpiece. Or a concept artist that creates a cool character.

Basically, it’s extremely rewarding and fulfilling to be in a profession were you create. Creating/building relationships, creating campaigns, creating marketing, building houses, building websites, cooking food, making music, writing books. They’re all professions you can enjoy and feel a sense of accomplishment while working.

I’m very happy I’m not in a profession that is less rewarding – I don’t imagine cashier or waiter to be self-satisfying in the same way. But I could be wrong.

There’s no greater professional joy to me, as a developer, than building something to the best of your skills and perfecting it to the last character. And beholding its mastery. This is how I felt about warrenshea.com when I built it. For that project, is me. And while people could do it in different, better, or worse ways, that project is effectively me and all my development “art”, experience, and skill, in project form. And that is something that, dare I say, is a ‘miracle’ of creation for it is infinitely unique, as is its creator.

I would wager the greatest personal joy would be fathering a son (note: I specifically say son as they would likely be more like me than a daughter). Though I imagine fathering a daughter wouldn’t be too far off.

The greatest professional joy to me, as a manager, has yet to be achieved. But a manager friend of mine has said that his most rewarding moment as a manager was promoting someone that deserved it and the elation of said person. I imagine that that feeling, the feeling of rewarding someone with years of good work, is quite rewarding in itself. And to know you’ve helped assist with that progression is its own reward.

I watch shows like MasterChef and Hell’s Kitchen. Bob Ross’ Painting. Those home improvement shows. And I just think – why is there no web developer show. And the answer is so obvious I shall not say why. But effectively, these shows are about creation. And that is no different from a web developer. I’d freaking LOVE to watch developers compete, talk trash, analyse each other’s code, etc. Just as home cooks can learn a thing or two from MasterChef and Hell’s Kitchen, I’d love to learn a thing or two from a non-tutorial based show about developers. I wager I’m likely the only person ‘in the market’ for this programming. But in 5 years, when they’ve exhausted their ideas…it could happen.

It’s only a matter of time…

Posted in Development, My Life, Web Developer | No Comments »

I’m starting to realize my age. I can’t believe it myself, but I am. When I was younger, my goal was to be a web expert – expert in all things web. But I realize I’m not 25 anymore. The world is not my oyster, I’m actually passed my peak/prime. Within a few years I’ll likely be a father and my professional skill/rate of growth will decline as other priorities take my time. Hell, it’s already started to decline. But I’m starting to realize: I’m done.

And I look at some people I know, still with their dream of getting into this or doing that. But I think it’s too late for them. And it’s too late for me. And this isn’t me being a pessimist, this is me being a realist. Ironically, me from a couple years ago would likely have been an optimist, still thinking I could achieve my goal/dream. Another word would be…delusional.

And I know some of you are saying “You can’t lose hope, don’t give up on your dream”. And I agree that all is not lost until you give up, but at this point, if you’re not putting 100% into your dream, where you’re already behind – it’s time to face facts: you won’t catch up. Not to those 25 year olds with more natural talent than you have with your natural talent + 10+ years experience. Not unless you put in that 100% – which you should have been doing all along.

I’ve come to the point where I realize I cannot be a web expert. My back-end skill, while okay (maybe 3-4/10) will not grow if I don’t support it. And I’m not. Strategically speaking, I’d have a much higher chance of professional success if I stick to my already strong front-end and nurture and develop it further.

Not thoughts I would have had 4 years ago…but I’m 31 now. I mean, granted being a 31 year old first time manager isn’t bad – perhaps this is the direction my life should go (for the first time, I feel like I have a professional head start on others). But I think development will always come more natural to me. It’s hard to say at this point. Still, it would be easier to nurture a management skill and use that as the basis of my new professional career than to go back to front-end development. I’m not sure if I have a future in front-end development….or rather, I’m not sure how long my skill as a front-end developer will support my professional career. Within the next decade, I’d wager that I will not be that marketable. And don’t get me wrong, it’s not because of my time as a manager – I’ve learned enough front-end that I can continue my progression without doing it on a daily basis – I just don’t think there’s a market for a 40 year old front-end developer. I’ve never seen one at that age in all my years in the job…that’s gotta mean something right? That said, web was/is still in its infancy and where it will go is beyond me.

Enough realism. It’s bumming me out.

Posted in My Life, Web Developer, Work | No Comments »

You are currently browsing the World of Warren blog archives for June, 2013.