Most of my free time (if I have a few hours) is going towards Zelda: Skyward Sword. I’m not that far tho…like, 3rd dungeon outta 8? And you know it gets more complicated later….

Other free time consists of social things…family related, etc….or social things. Planning to go clubbing for a friend’s bday tomorrow. I’d rather play Zelda (no, seriously). And then House Party of NYE…but again, I’d rather play Zelda (no, seriously). Social events are too taxing on me, I prefer just spending time alone >_< Especially with so many social events....ugh. Sick of it all. I brought my PS3 to work earlier this week and we played quite a bit of Marvel VS Capcom 3 and Virtua Tennis 3 today. Virtua tennis is fun with 4 players... I've been rewatching Friends...on Season 10, almost finished. When I'm done, we're gonna rewatch Glee. After that, maybe Dawson's Creek or Gilmore Girls. I bought the Dawson's Creek box set for pretty cheap the other day....and I got the Gilmore Girls box set for Z over Christmas...it was like, 1/3 the regular price so I thought why not. Note to self - To blog Quote Zelda: Skyward Sword Gamer VS Developer Girls > other things

Off to bed. Not really feeling to good tonight….energyless. Not sure why. Hope I’m not getting sick.

Dammit. I was on such a good post streak this month. Keeping it consistent, while also writing (what I believe) were interesting posts. I was trying to get around 15-20 posts this month but it doesn’t look like that’s gonna happen. Anyways….I keep getting side tracked on the things I should be doing.

When I’m supposed to be sleeping: 12-2am
When I’m actually sleeping: 3-4am >_< (and for some reason, I’m not getting a caffeine fix….but still able to function during the day) What I’m supposed to be doing: Something productive What I’m actually doing: Making Gundam models…they’re done though. If not for tonight’s family dinner…hopefully I’d be doing something more interesting…like playing games! I’ve been pondering what to game lately…between Zelda: Majora’s Mask and Zelda: Skyward Sword (which I just received this week). I wanted to play Majora’s Mask simply due to the chronological order of having last played Ocarina of Time. But…I’d like to play Skyward Sword because…it’s new! I’m not 100% sure which to play yet. Anyways, so what to do tomorrow? Read + Game….yes, that’s the plan.

Sleeping at midnight, waking up at 3am…and now it’s 5am >_< The fanboy in me really liked this. I developed something for work with another developer, Rakesh.

The customer sends an email with: “I found a pic of you guys, can you guess who is who?” and attached/posted this image: 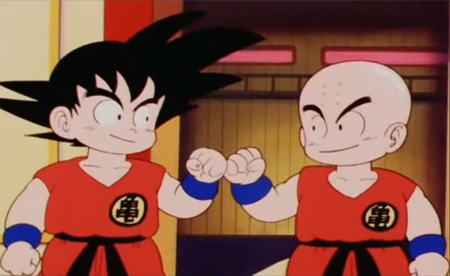 Rakesh replied with: “Why fake it when you can have the real thing? Autographed copy in the mail.” and attached this :) 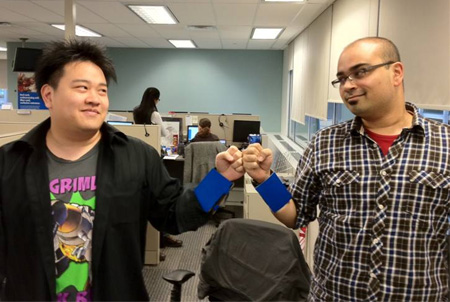 Anyways, it was both hilarious making the picture…and how it turned out. The resemblance is uncanny. Also, any comparison to Son Goku is quite the dream come true :)

Remind me to do a post about my hair inspirations: Trunks and Amano Ginji :D

This is one of my more embarrassing and funny stories when Z and I were first going out. Some of you may have heard it before.

Within the first month or so of our relationship, we went to China Buffet King for lunch one day. I was wearing this tattered T-shirt…that I still seem to have (6 years later) and Z was wearing this Red Roots sweater.

Anyways, Z had just gotten up to get some food and I followed shortly after, going separate ways. As I was getting food, I saw her from behind getting food. I walked up beside her on her left, put my right hand around her waist and pulled her close so that our asses were touching, side by side. We held that pose for a moment…and then she turned away and walked away. No words needed to be said.

I sat down, with my food…and noticed Z was already sitting down. “That was fast” I thought. But as I sat down, I noticed that the hood on the red sweater she was wearing was down. It was down the whole time. But when I put my arm around her, the hood was up. I then noticed another girl still getting food, in the exact same Red Roots sweater. Hood up.

Yes, apparently I had walked up to a complete stranger, put my arm around her waist, and pulled her in close, held it for a moment…and then let go. No wonder she walked away without saying anything. She was probably freaked by the perv! …which was apparently me!

Needless to say, I was pretty damn embarrassed.

Other
Organizing my music onto YouTube instead of MP3s

Notes
I’ve been…hmm, being social? Blogging? I play a few Mario Kart races a day…but hmm, it doesn’t look like I’m doing much else. Where is my productivity going? >_<

You are currently browsing the World of Warren blog archives for December, 2011.