I just realized that “writing” should be a hobby of mine as well. Though like photography, I’ve got a lot to learn about for writing…um…good…writing. y’know?!

With my new site, I’m going to need to write well written reviews for each statue/figure. And if there’s one thing I’ve noticed about my writing, it’s consistent. Consistently repetitive. I use the same words over and over, my vocabulary is limited and restricted and it’s difficult to convey what I mean in different ways.

Writing is something that I believe becomes stronger with reading and analyzing style…something I’ll need to pay more attention to in the future. I need to find well written articles and reviews and…well, try to mimic (read: copy) them.

But that’s the same for learning almost anything: copy and tweak to your needs.

If I’m going to be spending mornings taking photographs, I should start spending more time on writing reviews during the night.

I already know how to write…and write a lot. But the key is making it good.

Posted in All Posts, Secret Project KB, Writing | No Comments »

I didn’t realize when I was getting into Photography that there’d be so much cost involved. I knew it was time consuming. And I knew the camera was going to be expensive. But overall, I now have (at least) 2 very expensive hobbies.

One of them is toy/figure/statue collecting. I’ve been trying to have a better willpower towards this though lately and not getting things I want…but can do without. Well, technically I can do without all of them :S

And I just got a car.

And I occasionally buy comics. And DVDs. And artbooks. And game guides. And manga.

Yes, I’m a materialistic person BUT THAT’S JUST WHO I AM.

Anyways, I’m pretty certain my photography costs are going to stop for the foreseeable future, which is nice.
I’ve almost got all the manga I’d ever want (I think I’ll buy Slam Dunk! when it’s finished…and then I’m DONE!).
I’m becoming better with game guides and artbooks and dvds.
And while I sorta got back into comics, I’m sorta falling back out now too.

At least my primary hobby is relatively free: Web Development and Web Design. That’s something I can spend hours doing with little to no cost :D So thank goodness for that!

I feel like the only thing I’ve been writing about lately is photography. I’m learning so much, so quickly and I just want to keep doing/showing more! I just listened to a 1.5-hour Podcast on Anime Figure photography (right up my alley) in which photographers basically….said stuff that I’ve learned within the last 2 weeks. But I’m going to listen again and take notes on anything I missed.

I’m really glad I have this new photography hobby now. It’s always great to learn new things and photography’s definitely something very accessible and there are a lot of people who know about this stuff. I mean, when you’re younger and in school, you don’t have money for a hobby DSLR…but once you’ve been working for a bit, you can really get into this hobby. It’s great just…really getting into something with a lot of passion. I’ve been waking up early Saturday and Monday to take photos. When was the last time I ever woke up early to do something passionate? The answer: NEVER!

I don’t wanna keep blogging about photography but unfortunately, that’s my life focus at the moment…still, there’s so many other things to write about! I just need some inspiration and motivation….

Lookit my Macbook sticker! When the screen goes up, the “Apple” lights up and it looks so cool! That is all.

I spent a lot of the weekend taking more pictures…and trying to get the color right. It’s important to me that the color on these photographs is accurate to the statues…so I’m trying really hard to make it right. 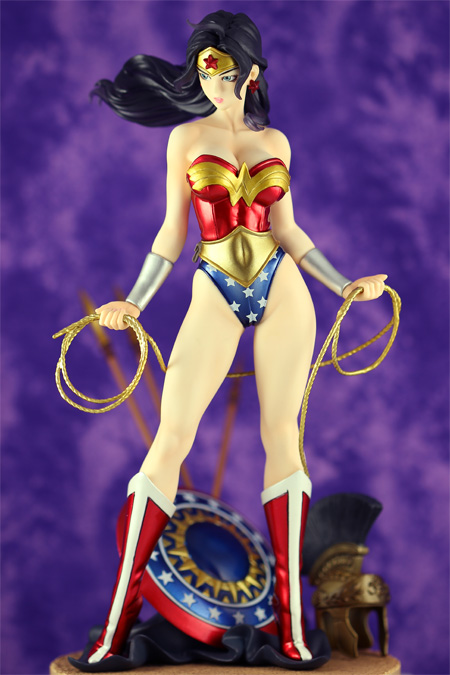 This was my last “best” Wonder Woman. It was color corrected with a grey card to get the color temperature right.
f/2.8
ISO 100
Exposure 1/60
Using a lightbox and set on cloudy 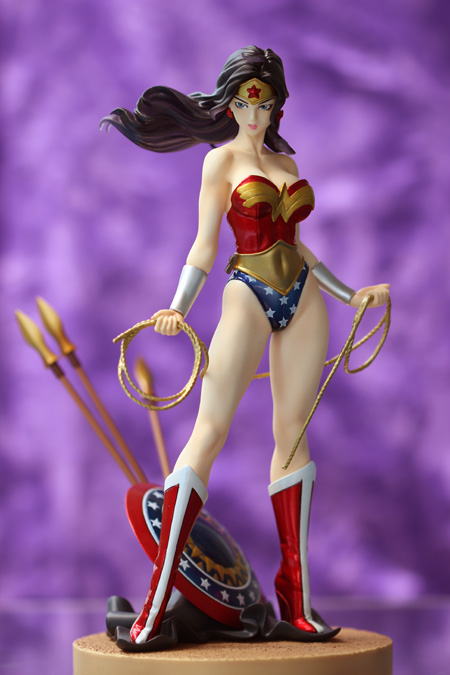 Color corrected.
f/2.8
ISO 100
Exposure 1/250
Taken outside, using Noon-ish sunlight on the left + diffusion panel
Camera was (probably) set on Daylight but may have been set to Shade 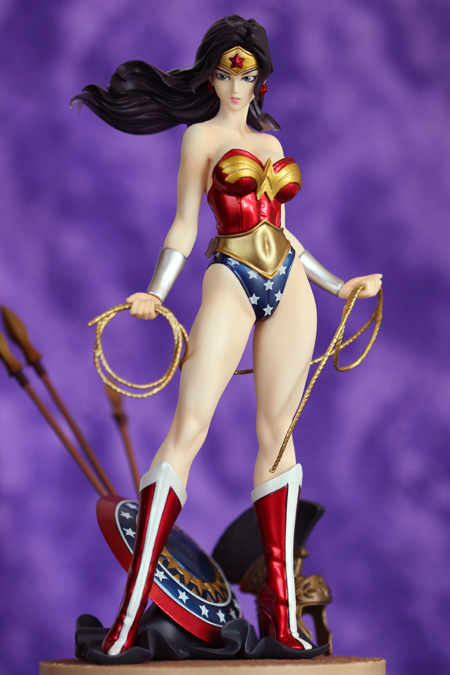 Color corrected.
f/2.8
ISO 125
Exposure 1/125
Taken indoor using 5pm-ish sunlight (coming from the right) and using a reflector on the left.
Camera was set to Shade 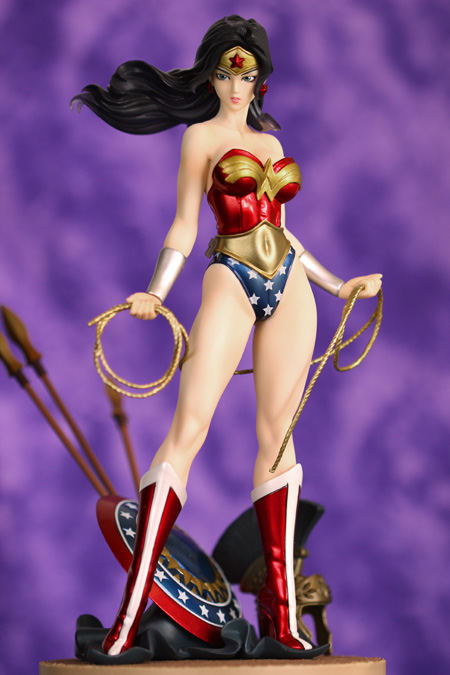 Color corrected…even more than the last! With level adjustment layer, in Photoshop.
All other settings are the same 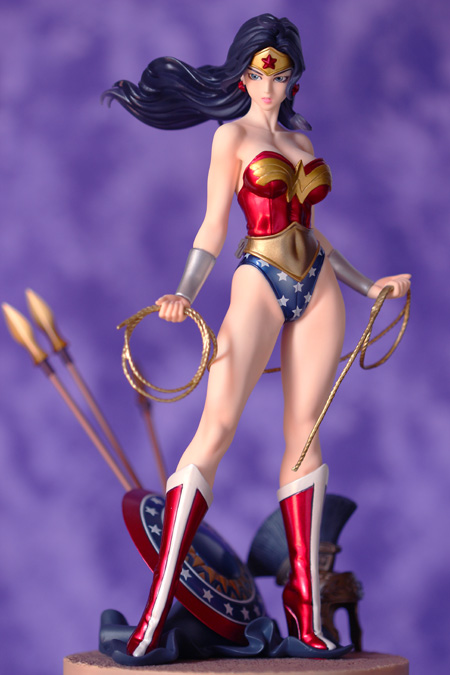 Color corrected
Taken indoor using 8:30am-ish sunlight (coming from the left) and using a reflector on the right.
All other settings are the same as before

I think some of the colors are a bit too strong, I need to tone them down…but for the first time ever, these photos accurately portray the skin colors correctly. It’s not too blue/zombie like. I can adjust the colors a bit later…but it’s close to my “what i wanna be” example: 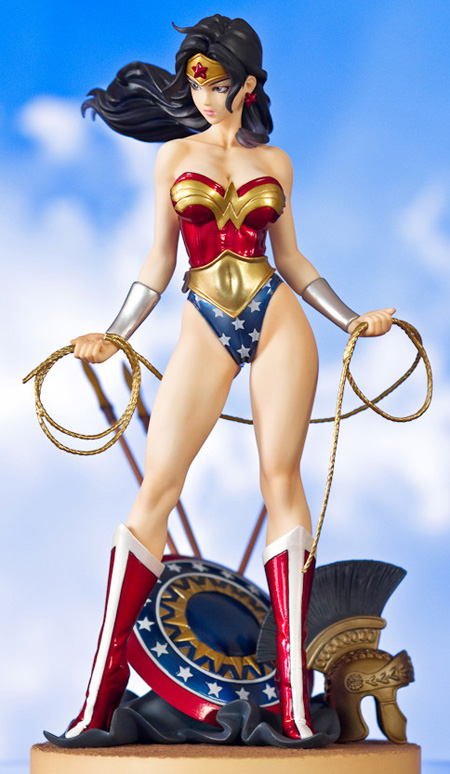 I used to think that I wanted a photo to have light. SO MUCH LIGHT that there were no shadows. But I was incorrect, shadow provides depth. But you don’t want too much or you lose information. You want subtle shadows. And you don’t want blinding light as that’s a loss of information too.

I’ve been working hard on kotobishoujo.com. I’m spending my time either taking photographs of statues or filling the site with content

Originally I thought some of the photos were good :
http://kotobishoujo.com/dc/wonder-woman/ (possibly NSFW) but it’s looking like my photograph’s lighting is still off, even with a grey card.

I’m not getting the exact skin color of the statues…meaning I need to take my photographs back to the drawing board. It’s okay, I only took, processed, resized like, 150 of them T______T. But better to fix this issue now than later.

I also notice that while a lack of light is not your friend, proper shadows are required to define the shape of items. You can’t just have all the light in the front, you need to be strategic for shadows to achieve depth. Ah well, better I learn this now than later.

I wish I had a photography mentor!

You are currently browsing the World of Warren blog archives for July, 2012.