Why am I the center of attention [for a moment] at other people’s weddings?

1. I wasn’t really the center of attention here, there was just a cool shoutout. The groom, husband of my cousin, mentioned me in his speech. I was in the groom’s speech! He said something along the lines of “I can’t believe [my wife]’s cousin, Warren, is in the same room as [my aunt]”. When I heard, I smiled…nice shout-out from the groom! Unexpected and very awesome!

6. This was the most embarrassing one. So basically there are 4 people at my table: Me, Z, her sis, and her husband. At one point, the MC called out family members individually [and thanked them for coming? i dunno] and the people called stood up and waved or something to all the other tables. The MC called the 3 other people at my table: Z, her sis, and her husband and they all stood up as the MC introduced them. It was pretty weird that I wasn’t called out (obviously they didn’t know me), so there were 3 people standing, 75% of the table and the whole room looking at them. And I was sitting in my chair, looking up at them. AWKWARD. OH GOD SO AWKWARD. But the worst part was that after everyone was introduced, the MC came up to me and quietly asked me what my name was. I said “Warren” not knowing why she asked. A moment later, she ran to the podium and said to all the guests: “And I’d also like to welcome Z’s boyfriend, Warren”…and I stood up, alone, at Z’s cousin’s wedding. I knew a total of 3 people there, out of 160~…and there I was, standing all alone. SOOOOOOOOOOOO EMBARRASSING. SOOO AWKWARD. Everyone cheered me…and I waved and smiled…but oh man, so weird. Fortunately, I mean…it wasn’t in front of anyone important…so I didn’t really care. But man….that was…my worst “center of attention” moment at any wedding.

7. This one would come in second, after #6. So the bride and groom would kiss at the wedding but someone would have to do it first to “show them how it’s done”. The groomsmen, also my stupid friends, yelled out my name as other names were being shouted for who should set the example. Somehow, my name made it as the one that stuck out. I was given a few minutes to think of a creative kiss. Fortunately, I had brought my samurai sword umbrella….so we set up the scene. Z was the damsel in distress….she was standing, but her 2 hands were held down by 2 groomsmen [her captors] as she cried for help. I ran in from the sides with my sword umbrella and slashed the 2 captors w/ sound effects provided by another groomsmen. I grab Z from around her back, bring her close, and plant a kiss on her. In front of everyone. Heroic, movie worthy kiss. Anyways, the groom had to follow, doing the same thing I did. Man….definitely second embarrassing wedding moment. I still need to give my friends, the groomsmen, some kind of revenge.

10. Just this last weekend…the MC had announced to the audience that the bride and groom had been going out 11 years. “11 years ago, [A] was popular, [B] was popular, and NSYNC had a #1 CD. What was that CD called Warren?”
And I’m like O_O; – OMG WTF IS HE TALKING ABOUT?!. Al the eyes were on me…I eventually, what seemed like 10 seconds but may have only been 1 or 2, shouted “Celebrity” which was incorrect….Anyways, for a moment, while much of the audience was looking around in confusion, my friends were looking at me. And I was just a big nervous sweat. Ugh.

I said no drunken blogging tonight via Twitter…but well, I’m not drunk! So this is just…normal blogging :)

Let me explain the shot theory (and I have absolutely no idea if I explained it in a previous post).

When I went to Montreal, 2 weeks ago, my friend was telling me how he doesn’t drink beer. He doesn’t like the taste, he gets headaches and/or sleepy after. Basically, it described me exactly. He told me that he can do shots fine…but not beer. Shocked by this, I decided to test a theory tonight at a friend’s wedding. No beer. Some wine and champagne…but no beer. Just shots.

Let’s see what my tolerance is like when beer isn’t involved. To be honest, I was hoping to get trashed tonight. To earn my drunken puke. I drank whenever everyone else did, without holding back. Everytime I saw people I knew doing shots, I joined in. Unfortunately, even drinking as much as I could (with other people) was a bit of a let down. Overall tonight, I had 4 shots of whiskey…and an undetermined number of these cranberry shots. I would guess about…8 to 10 of them. But they were watered down…so let’s count that as 4 shots. Combine that with the 4 shots of whiskey and that’s 8. Now, as I write this, I feel relatively fine. To be honest, I’ve felt worse drinking 2 beers…but then again, my tolerance has been vastly improving lately. So…well, I dunno but the Shot Theory seemed like a success. It doesn’t seem to affect me like beer does. Though I’ve also done 5-7 Corona’s before, fairly recently, so it’s tough to say. That may have been an isolated, rare incident.

All I know is that I should have done more shots. You don’t just wanna get shots alone…and I honestly ran to the bar every time I saw people I knew doing shots, and tried to get in on it. We’ll have to test my alcohol/shot theory another time. I know that I’ve never had shots like this….never more than 2 or 3 in a night (with the exception of Montreal). It was good times but even trying my best to get smashed, wasn’t good enough. Next time there’s an open bar, I’m gonna shot my ass off.

Oh yeah…also, I have no idea (and I’m slightly terrified) about going to sleep tonight…I predict I’ll be fine but maybe shots hit me later…I have no idea :S

When my friend turned 29 earlier this month, he “realized” that he had exactly one year left before hitting 30. He started thinking about what he wanted to accomplish in this upcoming year to fulfill whatever goals he wanted for that age.

It’s always good to take a step back from the road you’re on and think about where you want to be and how you want to get there.

As insightful as that might sound, as I reflect back on the past as well as look forward towards the future, the many answers to my questions are whispered to me with a resounding “I dunno…”.

I’m very happy with almost all aspects of my life with the exception of a couple. I don’t really feel motivated to do anything big or accomplish anything in the next year. I’m in a great place in my life right now, as I have been for years. My future looks promising. Not spectacular, but in no way a failure. There isn’t much I’m worried about…maybe money I guess. Not that I don’t have any but…well, it would always be useful to have more. I can do what I want when I want for most daily things but I can’t do a few things on my list such as: buy and move into a house. That’s the only thing I’m really wanting to do right now. Set up all my toys in nice shelves. On a smaller scale, I’d like to eventually buy a new car. And on an even smaller scale, I’d like to buy a nice camera. I’m 100% sure if I cut out my monthly shopping, I could afford one. Sigh…10 years ago I bought a Wacom tablet instead of a PS2 and I knew, after a few years, that this was a mistake. A few months in and I’m wondering if the Mac I’ve purchased could have better been used on a Camera. I still want to learn Mac stuff…but it’s just…hard to compete with the PC of which I’m so familiar with.

Anyways, got side tracked. The real want is the house. But I’m in no rush with that either. I like living in a condo, close to work…just north of the Toronto Downtown core. Even one such as I, a lazy, unmotivated computer hermit, can’t help but explore downtown by foot. And I’m at the perfect age and state for that. No kids…still relatively healthy. I like my condo. I just don’t have enough room with all my toys. Also, I want to put my toys up but I’m dying on shelf space.

I live a mediocre life. It’s average. Eventful and uneventful. Interesting and mundane. For one who needs balance….it is…well, what I’ve made of it thus far. And while some people may think my life has not been led to the fullest, and while others may think my life is too active for a self proclaimed social hermit, I find that everything is pretty much just right.

It’s definitely nice to reflect…and not be worried about anything. Though I wonder if my lack of motivation predicts future failure. Hopefully, as long as I keep busy and keep my mind relatively sharp, I will have a decent future. I haven’t painted myself into a corner just yet… 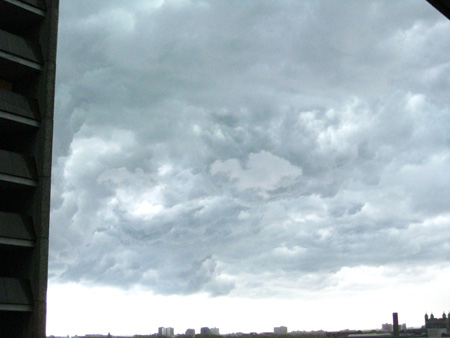 I really liked the contrast on the clouds in this shot.
Looked a lot better in real life tho…this camera didn’t do justice to it 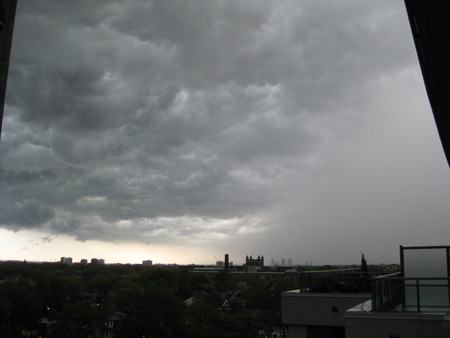 This was another interesting shot…look at the contrast of clouds/fog, coming in from the right.
It’s like a natural disaster were looming just around to corner…
No photo manipulation here….just pretty interesting :)

Since everything was okay, I decided to move my warrenshea.com site to worldofwarren.com. In theory, it should have been a smooth transition. It wasn’t. While my worldofwarren.com site rendered flawlessly (connecting to the database fine, etc), I couldn’t get back in to WordPress. I thought something broke when I migrated it over. I attempted to log in to my warrenshea.com WordPress, still on my domain. It didn’t work. I thought I crossed the wires somewhere…so I was trying hard to find out where.

I spent 8 hours today trying to figure out why I couldn’t log in (on either domain) to WordPress. I tried reinstalling WordPress…on BOTH domains and it wouldn’t work. I installed WordPress on a fresh, clean domain. AND IT DIDN’T WORK. WTF. I was getting pretty scared now, worried I might have to transfer all my table stuff over…but WTH, even fresh installs aren’t working. Could it be something on the server? I had even created brand new folders to put my stuff in….New folder + Fresh WP 3.1.2 didn’t work…seriously, WTF.

Anyways….I spent so much time looking at the domain problems because I thought it was all the migration. And after 8 hours, I found out it wasn’t. It was WordPress 3.1.2. Desperate, I decided to try WordPress 3.0.6 and viola, it worked instantly, perfectly, and as intended.

While I do believe the migration had been part of the problem, it seems WordPress 3.1.2 was the real culprit.

Man…I couldn’t log in no matter what I did. My login URL would simply redirect back to the login screen with a querystring of &reauth=1 added on the end. It was brutally annoying. Anyways…yeah, again, reverted back to 3.0.6 and there were no problems.

Note: With my PHP Proxy, I modified my warrenshea.com/?feed=rss2 so that everyone’s RSS feed did NOT break. Basically, if the ?feed=rss2 querystring exists, then it does a check on worldofwarren.com/?feed=rss2 and retrieves the XML results and outputs them. Hopefully it makes things seamless to those who link to my blog :)

You are currently browsing the World of Warren blog archives for May, 2011.