As I said, I’ve been watching Dawson’s Creek again lately. There’s this music that plays at the end of each episode in seasons (2-4? 3-4? i dunno) but I really like it, I actually look forward to listening to this when each episode ends.

FYI it’s only 30 seconds..so listen to it a few times!

I don’t know…why, but I get this emotional feeling when I listen to it. Maybe it’s nostalgia, maybe it’s how I relate to this show but as the piano and flute starts up, I feel an urgency…to live life. And a sadness that no amount of life lived can be enough. That time is fleeting…and it makes me…sad. Like there’s a story there…that isn’t finished or that you won’t ever hear. I DON’T KNOW/CAN’T EXPLAIN.

It just gives me an urge…but to do what, I don’t know.

Listening to the song…bums me out. But I can’t stop…there’s something beautiful in it and I just…sigh…I don’t know. Just what? 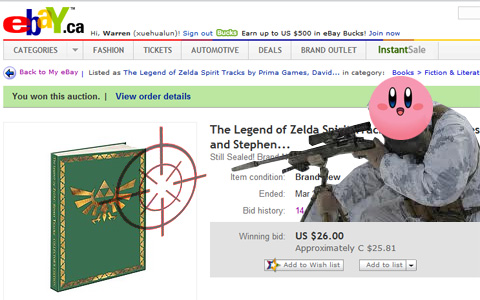 Okay, that is definitely not only a bad Photoshop job, but it’s pretty scary if I do say so myself.

I just won an eBay auction….sniped at the very end between two people who spent a lot of time slightly counter bidding each other, increasing the price.
I just wanted to write about my eBay experiences, how (I would) bid on a closing auction. I can’t really call myself a pro, despite the title of this post. Maybe it’s not the best way. But it’s how I do it…

1. LOG IN to eBay a few minutes before the auction ends and make sure you’re logged in. Nothing worse than bidding last minute and then having to log in first….screwing up your carefully laid timing.

2. OMG DO NOT BID UNTIL THERE’S LESS THAN 30 SECONDS LEFT. Watch ahead of time to see how many people you’re competing with. The more people, the more likely you’ll have to have a high bid.

3. Figure out what the maximum amount you’re willing to pay is.
…and if you’re like me, figure out a slightly higher REAL maximum amount incase someone beats that bid and, like me, YOU DON’T WANT TO LOSE. OMG maybe I shouldn’t write this guide, too many personal characteristics getting in the way. Anyways…figure out those 2 amounts, you’ll likely only be able to bid twice.

4. Make sure your internet connection’s not too laggy.

5. Anyways…this is how I bid…
In the closing 15 seconds, put your first maximum bid in. eBay won’t just suddenly take that bid. If an item is like, $16 and you put $50, it will list the bid at like, $18. And then someone will have to counter that bid. But you’ll continuously overbid them (eBay does it automatically) until your $50 isn’t enough. eBay is awesome in that way but people don’t know that, they assume it’s like a regular auction.
This way, you put in a max amount you’re willing to pay, but you won’t even pay that much….unless someone else has a higher max bid. And that’s what your second, final last bid is for. And also why you only have 15 seconds. That’s just enough time to bid and confirm bid once. And bid and confirm bid twice if it’s not enough.

That said, I haven’t won all the auctions I do simply because I don’t bid enough. But I know not to bid early and bring up the price for no reason…I never never bid in an auction until the final minutes. And most times I’m beat out, it’s cause someone else has done the same strategy, with a higher maximum bid than I. It’s unlikely those that casually bid small amounts will beat you…cuz they don’t know how to play the game.

BTW: I bought that Green Zelda book…for a game I don’t have. Cuz now I have the Blue Skyward Sword book, the Brown Twilight Princess book, and this Green one….ALL OF THEM! TRIGUIDEBOOK COLLECTION COMPLETE! NOW TO GO FIND A MASTER SWORD (off eBay)….no, seriously, I really want to buy one. Maybe when I have a house.

I know I haven’t blogged in SO LONG.

There’s a reason for that. And it’s not Tiny Tower. It’s freelance.

As I’m doing this work, we’ve (Z and I) have been rewatching Avatar: The Last Airbender, which is probably one of the (if not the) best american cartoons in the last decade…all in preparation for Avatar: The Legend of Korra which premieres April 14. Though we all got a sneak preview of the series premiere this weekend and it looks ABSOLUTELY FANTASTIC. I definitely recommend someone who enjoys a good cartoon to watch that. You won’t be sorry.

As I’m doing this work and Z is asleep, I’m watching….um…Dawson’s Creek, which was THE teen drama of my generation as well as the WB/CW pioneer for other teen dramas including One Tree Hill, Gilmore Girls and…um….Fox’s O.C. and that Gossip Girl show. Yeah, I know Beverly Hills 90210 and Melrose Place and Party of Five precede this…but…that was before MY time. Anyways, I only watched Season 1-4ish when I was in highschool. I’ve been meaning to complete the series and I’m glad I am…I really liked S1 and S2 and the rest are…okay. I’ve been meaning to write this blog post regarding some topics it covers in the series finale for a week or two, but I only wanna write it after I actually watch the episode. That’s kinda why I’ve been procrasting blog posts for a while…but I realize that I better write something because it’s going to take a few more weeks before I reach that episode.

I had that dream again…

That reoccurring school dream where I’m at UWaterloo and I have more exams than I know what to do with. And I’m going to fail them. The stress…ugh.
Fortunately I wake up and realize it’s all a dream and that I did indeed graduate. Whew. That’s always by far the best part of the nightmare. Knowing it’s just a dream and that I’m safe and don’t have to worry. Like srsly, school was 6 freaking years ago! I’m tired of having this stupid nightmare >:( Can’t dream Warren figure out it’s in a dream? What an idiot.

But I’m wondering why I’m having this dream now? I know I have it once in a while but I don’t think I’d had it in a long time.

I was working out timelines for the freelance project I’m working on last night and they’re….tight. Very tight. Manageable only if I work every day. So I was kinda stressed on it. And then I went to sleep… >_< So maybe my stress and anxiety from my real life seeped into my dream. On the plus side: While I’m stressed about freelance or work or anything like that…I don’t think any of it compares to the stress of UWaterloo. So it kind of puts things in perspective. As important as a job is, if I fail a project, there are lower consequences. I can always get another job (if that ever came to be). So I’m less stressed about the freelance project now…tho still have a lot to do.

Posted in All Posts, Daily Randomness, My Life | 1 Comment »

Hamsters don’t live that long. Only 2 years. In this case, just shy. Well, 2 of my 5 hamsters had already passed away before this date. Phoebe succumbed to…what I can only describe as a fall from grace, being the nicenest hammy and then turning to pure evil! I think I still have a mark for when she bit me on the finger, causing blood :/ Joey fell a short distance (she just ran out of a cage! she wasn’t dropped) and had a hamster concussion. She passed away shortly after.

Chandler got this…leg infection thing months ago. I’d actually seen it before and it’s what killed a previous hammy. But for some reason, Chandler survived shockingly long in spite of this. Anyways, Chandler, probably my favorite hamster ever, passed away today :( I’m sad, but not as sad as some of the other times hammies have passed. I guess I’m just used to it now. Actually, I predicted her death a few days ago after watching her struggle to walk properly, eat, and noticing her lack of movement and that she was sleeping a lot more than usual. I was kinda waiting for it to come any day now.

Anyways, here are some of my Chandler videos! She was the cutie hammy and I’ll miss her a lot :'(

Chandler cleaning herself part II.
My favorite parts are 1:00-1:07 and 1:15-1:25 ! I love when she uses her tiny little hands and runs them down her face! HER ARMS ARE TOO SHORT! And rarely will a hamster sit on their bum with their legs out, usually they clean themselves when on their feet. Not Chandler tho, she liked putting her butt on the ground :) She’s so white compared to her earlier videos…age is a crappy thing.

Other Hammies
Monica sleeping in the Tube

Phoebe and the magic almond

You are currently browsing the World of Warren blog archives for March, 2012.