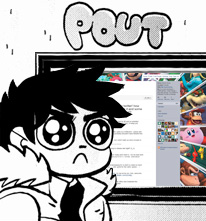 I’m feeling completely underwhelmed by this episode. I can’t seem to wrap my head around Dexter’s character and thoughts…

He’s spent his entire life trying to learn emotion…for someone as intelligent as him, someone as careful, someone who practices emotion his entire life, I can’t seem to figure out why Dexter‘s acting (not Michael Hall) is so bad. Learn how to cry Dex, it’ll come in handy some day (like this episode).

I thought the Mickey Mouse hat was an interesting touch (while Dexter was breaking the news to Rita’s family). Throughout the beginning, I’m wondering exactly how everyone is gonna react to the news and when I see it, they throw in this completely ridiculous hat. I was expecting it to be…dramatic. But instead, I was thinking “WTF, he looks ridiculous with that hat on”.

I still couldn’t wrap my head around Dexter’s lack of fake emotion in this episode. If I were a cold, emotionless….uhh, let’s say vigilante because I’d rather not call myself a killer, even hypothetically…I’d totally know when to pour on the fake emotion. The ONLY reason why I can see him not faking emotion is if he doesn’t care, if he’s gonna drop his life and go elsewhere. Which is where they took the ep, so it sort of made sense. And then he came back…so he should have still put on a better acting job. Contingency plan much Dexter?

Overall, I was disappointed with this episode. Again, it left me underwhelmed. The eulogy at the end was TERRIBLE….I thought after what he’d been through, showing real emotion for possibly the first time and everything, he’d have something interesting to say. But he didn’t. I feel like I’m Doakes this episode, wondering “why can’t everyone else see there’s something majorly wrong with this guy?”.

Isn’t it going to be suspicious that most of his stuff burned down? Where was he keeping that stuff anyways?

I hope, starting next week, they really begin to take this season in a direction. Who’s the antagonist? What’s the twist? There are only 12 episodes left, this one was wasted.

I’m rewatching PoT…again. I’m at the point of the Junior Invitational Team…around episode 135-150? And I thought I’d imagine my dream team, based on their skill at that point.

These guys are all national level players…the only real combination that needed to be thought out was the doubles. I dislike the idea of putting Sanada and Kirihara on the same team…but the key of these 4 individual players in the 2 doubles teams is Fuji Syusuke. He has a lot of singles skill but can play doubles as well. He’s also at the level that he can cover Atobe and “control” him. Sanada and Kirihara wouldn’t be good with Atobe and his ego. You could do Atobe and Sanada as D1 and Fuji and Kirihara as D2….I really like the idea of putting Fuji and Kirihara together…except we already saw Sanada and Atobe as D2 so it’d be boring.

The difference between this team and the anime one is that Yukimura Seiichi, Tezuka, and Tachibana were all recovering from an injury/surgery. In their place, Oshitari Yuushi (a poor man’s Fuji), Sengoku Kiyosumi (who may have been my choice after Tachibana), and Kikumaru Eiji (seriously, WTF IS THIS GUY DOING HERE). I really hate that the anime junior invitational team was 3 Seigaku + 1 Seigaku coach. There’s plenty of talent to go around! Tho I would definitely have the 3 Seigaku monsters, Tezuka, Fuji and Echizen in the team. So my real beef is just with Kikumaru.

Seriously, the only reason Seigaku’s team is so good is because they have 3/9 players that never lose. Out of 5 games, if they all play singles, they’ll always win! The others are all hit and miss.

Like in the Chuunin exam in Naruto, what if Rock Lee fought any guy OTHER than Gaara.

He would have fought and, I believe, most likely would have beat:
Uchiha Sasuke, Aburame Shino, Kankuro, Temari, Nara Shikamaru, Hyuuga Neji

I guess some of those are a little iffy. He was still better than Sasuke at the time.
Shino’s skilled…and I don’t really know the extent of his strength. I’ll have to watch Naruto filler some time.
Kankuo and Temari, they’re both skilled and good ninja….but Rock Lee imo should be able to take them
Shikmaru’s a tricky one…I would say he and Rock Lee are more opposite than any other match up. Brains always beats brawn but can brains beat speed? I dunno?! (I can see Karol absolutely in disbelief at what I wrote here…but she’s got a Shikamaru bias…).
Neji….pfft, even Naruto beat Neji. He also got turned into swiss cheese VS spider-man….he’s not so great (actually, I think his Kaiten is pretty awesome :D i love the idea of “absolute defense”)

I guess my opinion isn’t really fair either as I’m bias towards Rock Lee. Cuz he’s fast. Like the Flash. And the Flash will beat anyone in a fight…and here’s why.

A very recursive title…Does that make sense? It would be nice to have sounded intelligent rather than to have sounded like I don’t understand recursion…which, despite writing a few recursive functions, might be true :/ <insert server-side infinite loop>

ANYWAYS…small Site Update, something I wanted to do a couple weeks ago but forgot. I added some GMail themes within my GMail theme:

I think it’s pretty self explanatory.

I’d add more themes but it would clutter the top bar and on different resolutions, might not look great. Four is good for now…

Bad: GMail is supposed to be a minimalist theme but already, I’ve added a lot to the JavaScript code to implement this. While I’m sure I could clean it up if I gave it more time and thought…I doubt I will
http://www.warrenshea.com/common/gmail/scripts.js

I just realized, the way the GMail themes are changed is totally client side, there’s no page refresh or loading of specific css files. Meaning…theoretically, I could make a huge JavaScript that could modify my page for all themes (Megaman, Naruto, etc.)…reducing any reload.

Ahhhhhh….I wish I hadn’t thought of that, it’s so much work. Probably too much, like re-writing CSS files…in JavaScript. I should probably not do it……………………right?

Now choose the following:
<insert @$$hole comment: you should do it…that would be awesome! >

<insert rational comment: that is a waste of time, do something more productive>

<insert spam comment: hi guys! i am enjoying this phase of my life to the fullest as i am being showered with cashback cashback n cashback. i did online shopping at ….>

Posted in All Posts, GMail, worldofwarren.com | No Comments »

Busier than I’ve been in 5 years. Busier than I was (or should have been) in university.
My life, despite staying at home a lot, was already busy. Developing warrenshea.com, playing games, watching shows, messing around with photography, and even occasionally going out and hanging with friends.

None of that is changing but I’m adding more responsibilities to myself/responsibilities have been given to me.
1. Side Project
2. Math 106
3. Epic Site Project
4. Learn ASP.NET 3.5/4, HTML5, CSS3
5. My job has changed

Granted, hopefully I’ll stop/slow development of warrenshea.com but the above 5, which are all-new starting tomorrow….are going to make my life even busier.
1. Side Project – I discussed this in a previous post. I’m going to start working on it tomorrow and for the foreseeable future. It’s web related and will be interesting. Sorry, can’t disclose any more information other than that.

2. Math 106 – Zena’s taking Math 106 as a side course this term. From my years in CS, it’s exactly like Math 136 (I believe) which is Linear Algebra. Math 135, 1A term, was Classical Algebra where I learned about mod and encryption. Math 136, 1B term, was linear algebra. I’m going to try to (re)learn the content of this course, along with Zena, so that I can help her as well as test myself. I’ve been complaining that I’ve been getting stupider as I get older. This is a chance to re-learn something that I learned 8-9 years ago, which was probably my intellectual prime. Just out of high school, eager to do well in Waterloo. And before my UWaterFail where I gave up on myself. It’s an experiment as well as a 4 month long test for myself. I’m excited to see how I compare to back then. Will I still not be able to figure out the stuff I couldn’t figure out a decade ago? Time will tell…I’ll keep you updated on my experiment findings as time goes on… :)

3. Epic Site Project – I’m decided to, against my nature, make a realistic timeline for this. I have been thinking about how to develop this the last few weeks. I’m getting more into what I want and the next logical step will be to begin some sort of development. I want to get this project off the ground…I’ve been procrastinating this for a year or longer at this point. I have to get serious or this won’t ever get done.

5. My job has changed – though my title has not O_O (yet at least). Starting tomorrow, I officially change the role of my job. I’m going to work with my manager to remove some of the smaller, simpler tasks of mine and begin taking larger projects. This leads to more responsibility, more conceptual thinking, more research, more interacting with the business. Basically, it’s like the role of say, a senior developer…(though I’m not one….yet). I’m venturing into new professional territory so I don’t know how that will change my life. More hours? Late nights? More meetings? Tucking in dress shirt? >_< I don't know, but it's a big change. I often don't do what I don't like to do. I often avoid, take longer time, or delegate stuff I don't like. I don't think I have the option here. The good news is there's less to no grunt work, it's really....possibly a lot of the fun stuff. It's a good thing I quit WoW...like the last 9 months have been a preparation for this, the golden age of warren

/I bet I come home tomorrow and take a nap u_u

You are currently browsing the World of Warren blog archives for September, 2010.