Brains and Frames! and more…

Z purchased a collector’s/limited edition PvZ game because it came with this ultra kool toy. He stands at 3 inches. Very awesome. I wish it were mine. Someday soon, it will be *mischievous grin* 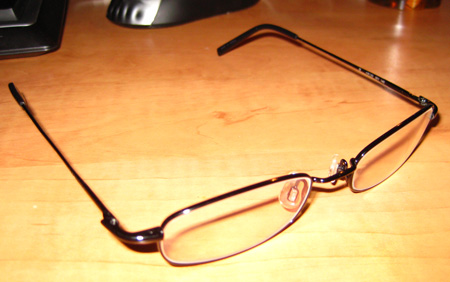 Last Friday, I saw a promotion for clearlycontacts.ca (some glasses place?). The promotion was that you can get “Free” glasses, limited to 3 days or 5000 vouchers. The promotion was actually a reduction of $38.00 from the cost, they also modified some of their prices so that glasses were exactly $38.00, effectively making the glasses “free” if you bought glasses $38.00 or cheaper.

While it would be too expensive to get glasses with my almost legally blind prescription, I thought it would be a good opportunity to get frames. See, because of my terribad eye sight, I don’t like to wear my glasses in public too often (also, they distort my vision on the sides and I get disoriented). But while they look okay, the lens really distort what’s being seen through them. I’m a bit too vain to walk around like that….vain or self conscious, either works :P I also don’t really like getting pictures taken with my glasses….however, I do like the look glasses have on me. I had glasses throughout grades 4 (or 6) to 10, getting contacts in grade 10. I’m very used to seeing myself in the mirror with them, probably seeing myself with glasses more often than without (as I would wear them most of the weekend, rarely putting my contacts on, unless I were to go out). So anyways…I basically purchased these 38.00 glasses, sans prescription….so that I could wear my contacts but still wear prescriptionless frames. Yes, I’m one of THOSE people. Well, I wasn’t until this promotion in which I thought I’d entertain the idea. The glasses cost $12 to ship…so it was getting new frames/glasses for $12. Not bad.

Anyways, I feel I can finally take a picture with my glasses on….though this one’s not great. Also, the hair, despite looking pretty nice, is a result of a 3 hour nap…so it’s flat on the other side and also why you’re not seeing the top. 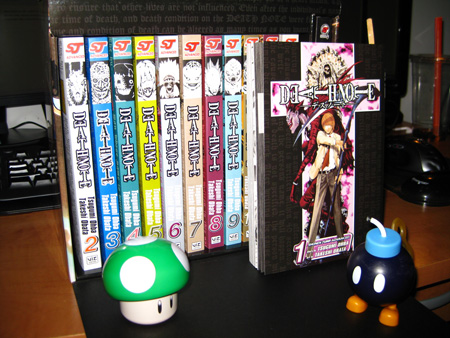 Got my Death Note manga yesterday. I realize that with my additional Scott Pilgrim and Street Fighter graphic novels from FanExpo, I have no room on my shelf for this. I found out yesterday that the artist of Death Note…is actually the same artist from another favorite manga of mine, Hikaru no Go! What a pleasant surprise. I was so glad to open this Death Note manga (I’ve never read the manga before, despite watching the anime a couple of times) and notice it wasn’t terrible. That’s Shonen Jump for you. Doing manga right. Very glad Prince of Tennis, Naruto, Bleach even, Death Note are all SJ. Despite Initial D fan translated manga being a favorite of mine, Tokyo Pop royally destroyed the translation to the point that it’s unreadable for me. It makes me cringe. Of all the anime/mangas to butcher, Tokyo Pop really screwed the american audience with Initial D. It could have/would have been bigger than Naruto (well, maybe not…).

Anyways…while SJ does an admirable job translating, I’m afraid I’ve watched the anime too many times and the translation isn’t quite the same. The manga also changed my view of Light quite a bit, he’s less sure of himself and what he’s doing in the manga, at least from the first 1/2 of the volume I’ve read. Disappointing. My image of him, shattered.
In the anime, at the end of episode 2, which is up there on my favorite moments…where L determines Kira can kill w/o touching, determines he’s in Kanto, Japan, etc…til the end of the episode where they both declare they are “Justice”, that’s one of my favorite moments. Two intelligent people, both believing what they’re doing is right. LOVE IT.
And then I read the manga and then both declare that they are…wait for it….RIGHTEOUS. “I’m RIGHTEOUS!”?!?!! W.T.F. that sounds terrible. I’ll read the rest but I may not like it! *pout* 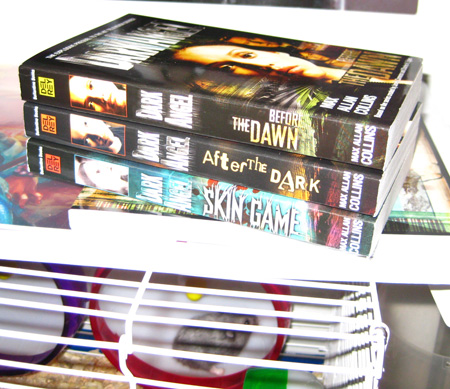 I’ve been a big fan of the Dark Angel series. I watched it on Fox and totally fell in love with Jessica Alba (this is where Z throws a bag of bricks at my face). Okay, I thought Jessica Alba’s CHARACTER here was awesome. I was a fan of the series, purchasing the DVDs and rewatching episodes quite a bit. Anyways, it ended abruptly and poorly after 2 seasons. I never knew there was more….despite wanting to know the rest of the story. I found out just a few weeks ago that there were some novels written to close everything. So despite not being one to read often, I did purchase these books and do intend to blow through them quickly. They’re small and they look child-like so my tenth grade level reading should suffice.

Posted in All Posts, My Life, Things I Own | 2 Comments »

2 Responses to “Brains and Frames! and more…”